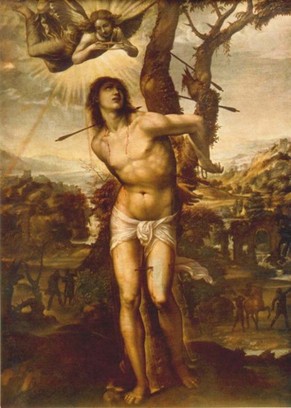 The martyr Saint Sebastian was born in Narbonne, in Gaul (France), around 250 A.D., and died in Rome on the 20th January 286 A.D.. He was a Christian secretly converted, who joined the Roman army to help the persecuted Christians. He was praised for his talent and bravery by Emperors Diocleciano and Maximiano, who kept him as Captain of the Pretorian Guard, a high place of imperial trust.

Saint Sebastian protected the christians who were jailed, till the christian brothers Marco and Marcelino were condemned to death. Saint Sebastian could not hold himself any longer and revealed his Faith in public, preaching and converting entire families to Christianity. Because of this, Emperor Diocleciano ordered the bowmen to tie him up to a tree and shoot him with arrows. Hit by the arrows and considered dead, he was taken to be buried by Saint Irene, who realising he was still alive, made him recover and looked after his several wounds. When he was cured, he presented himself again to the Emperor and was again submitted to martyrdom, killed and finally buried in the catacombs.