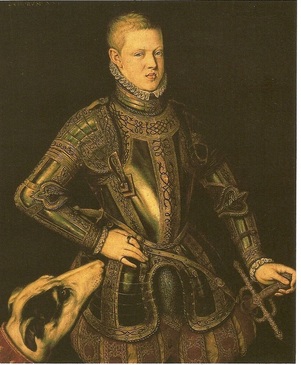 The Military Order of Saint Sebastian, also called of the Arrow, was founded by King Dom Sebastião (1554-1578), in honour of the Patron Saint of his name, to whom he was much devoted. The King was born on the 20th January 1554 (the day of the liturgical celebration of Saint Sebastian), which was the reason why he was baptised with this name.

This Order, according to several historians, was set up in 1576. We know that, back in 1571, King Dom Sebastião, applied for permission from His Holiness the Pope Pius V, to change the statutes of the three Portuguese Military Orders: Christ, Santiago (Saint James) and Avis. He wished to add, to the cross on their gowns, an arrow (frecha), in memory of the weapon with which the Saint of his name had been made a martyr. This distinction would be granted only to the Knights who would become remarkable for deeds in War.

Besides these changes in the Statutes (which took place on the 6th February 1572), Dom Sebastião had asked for one of the arrows with which the Saint had been made a martyr, to be placed in the Church he was building in Lisbon, in his honour. The death of Saint Pius V meant that only his successor, Pope Gregory XIII, could please the royal wish. Upon the death of Dona Joana of Austria (+ 07-IX-1573), the Pope sent him an arrow with the blood of the martyr, together with a Diploma “Breve” dated the 8th November 1573.

This respectable relic came to Portugal on the 9th February 1574, brought by the papal envoy, Pompeo Lanoja, who was received by the King when the latter was resting in the Almeirim Court.

King Dom Sebastião had a constant and extraordinary concern to represent the arrows (frechas), with which Saint Sebastian had become a martyr, in anything that symbolically represented the Royal Power and his own person as King.