Military Order of Saint Sebastian, called of the Arrow

Foundation and Restoration of The Order 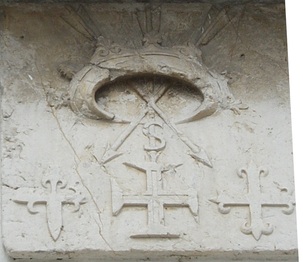 In the History of the Military Order of Saint Sebastian, also called of the Frecha, there are two separate periods. The first is the period of its foundation and brief existence, which took place between 1574-1576 and 1578. The second period is that of its dynastic restoration, which took place in 1994.

During the first period, the Order of the Frecha, or Military Order of the Arrow of Saint Sebastian, as referred by Doctor Alexandre Ferreira, in his work the “History of the Military Orders which existed in the Kingdom of Portugal”, and Manuel de Faria e Sousa, in his work “Europa Portugueza”, was created by King Dom Sebastião, as a result of his great devotion for the patron Saint of his name. It took the nature of a Military Order or of Chivalry, with the purpose of defending the Faith and widening Christianity.

This can be confirmed in the magnificent piece of writing in one of the old Customs houses in Setubal where, together with the insignias of the three military orders, also turns up the sign of three arrows representing this Order.

“and passing to what matters to me, I say, that I am fond of the King for this idea of the journey to Africa, and thankful for the Arrow of Saint Sebastian, for the glory of this purpose, to which he was heading, and remembering that his old grandfather, King Afonso the First, in his glorious success in Santarem against a countless number of Barbarians, commanded by the King of Sevilla, created the Order of the Ala, or of the Wing of Saint Michael, so as to write with such feathers the memories of his thankfulness, and to fly with that Wing in glorious triumphs; and that King Afonso the Fifth, in order to continue the glorious achievements, because of which he was called the African, created the Order da Espada de Santiago; and with these honourable memories, he created the Order of the Arrow of Saint Sebastião, a safe sword to triumph from the contamination of those Barbarians, because on the wings, with which he would fly, he would take health against the plague of Infidelity.”

The second period starts from January 1994, when the Order was restored by H.S.H. Dom Filipe, under express authorisation and powers granted by his August Father, H.H. Dom Alberto, Duke of Loulé, promoting its registration before the official entities and keeping since then, the name of Military Order of São Sebastião, said of the Frecha. On the 20th (day of St. Sebastian) of that same month and year, a mass was celebrated in honour of the Patron Saint and of the King Founder of the Order, which has been repeated every year, on the same day.

By a letter dated the 19th July 1999, the Duke of Loulé (Dom Alberto) confirmed in writing the authorisation granted years before, to his son, Dom Filipe, so that he would deal with its registration and ensured the activity of the “Old Order of São Sebastião, said of the Frecha”, expressly declaring “that him (Dom Filipe) and his successors shall be the perpetual Administrators, as Representatives of a Branch of Our House which is in the first line of Succession to the Crown of Portugal”. This document clarifies any doubt about the legitimacy of the “Fons Honorum” underlying the restoration of the Order (See James J. Algrant y Cañete, “El Fons Honorum”, in the magazine “Revista Ibero-Americana de Heráldica”, Colégio Heráldico de España y de las Indias, Madrid, nº 3, January 2004, pages 65-78).

From 1996 to 2003, the Order remained inactive, until, by Letter of the 20th January 2004, Dom Filipe resumed its activity to award and to distinguish those who deserved it by remarkable Distinguished Services to the Common Good and to his House, granting it new statutory dispositions.

The festivity of the Order is celebrated yearly on the 20th January, the liturgical day of the Patron Saint (Saint Sebastian) and the day of birth of the King Grand Master and Founder (Dom Sebastião).